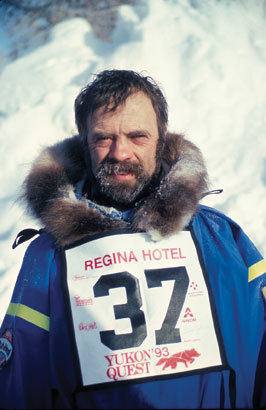 Bruce Johnson was perhaps the Yukon’s most accomplished musher in his time. He was well respected for his knowledge and skills, which were reflected in the training of his dogs, his breeding of exceptional dogs, and his competitive achievements.

Bruce won the Yukon Championship race numerous times, likewise the Percy De Wolfe. He also ran competitively in the Iditarod several times. And in 1986 he won the Yukon Quest.

Bruce was a member of the original group of Yukon mushers who met, in 1983, with their Alaskan counterparts, to establish the 1000-Mile Yukon Quest. And he joined the field for the inaugural race in 1984.

Bruce would always stop at cabins along the trail, whenever he saw a light in the window and knew someone was there supporting mushers in the race – a true reflection of his character. Bruce often stopped at Maisie Mae, on the Stewart River, to pick up and transport homemade socks, mitts and other items. Those things were then auctioned off at the Finishing Banquet to raise funds to demonstrate the appreciation the Quest had for those families at Maisie Mae who supported the spirit of the Yukon Quest. This is the person who Bruce was.

In 1993, while training for the Quest, Bruce and 10 of his dogs broke through the ice on Little Atlin Lake. Bruce and all his dogs died.

The legacy of Bruce Johnson lives on today through races like the Yukon Quest and the mushing culture of the North.

This site uses cookies. By continuing to browse the site you are agreeing to our use of cookies.